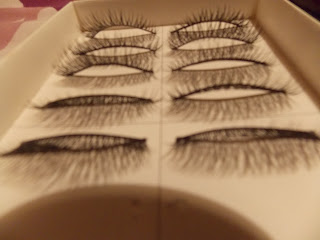 After reading Marian Keyes article in STYLE magazine, I have to agree that False Eyelashes have steadily become part of every girls make up wardrobe. Eyelure have also released a TRIPLE layered pair that im itching to get my hands on.

The rise in False Eyelashes has grown so much over the past 3 years, so much so we have mascaras claiming to give you that false lash effect.

I’m starting to realise that as the years go by, and the beauty must haves and essentials build up, my morning routine is getting longer and longer..

Eyelashes have become something i cannot live without and it’s not that my own eyelashes aren't adequate for whatever it is their meant to do, it’s just there not “fluttery” enough.

I once went out a few months ago without them and got told I looked “strange” without them, surely I should look weird with them?

I wear eyelashes daily, and recently I've started to not wear them.

Not because i don’t want to, but simply because laziness with my routine is kicking in. My working day usually ends with me at home now and not on an unexpected night out – this isn't to say that there isn't a pair kicking around in my handbag for that occasion.

Wearing eyelashes daily also means when I do get dressed up my mother described my eye lashes as “road sweepers” – Not a look I’m fond of if I’m honest. Wearing them becomes the norm.

The reasoning behind my eye lash wearing obsession is primarily, I haven’t found a decent mascara, and I’m a stickler for perfection. Falsies just make me have that “spring my step” sort of feeling...

It’s funny how you can get so attached to something, you originally didn't need, i look at photos of myself 4 years ago and i look fine, (i could do with longer lashes, but all in all i look presentable) ... Anyone comes near me with a camera these days and I’m not sporting a wow brow, lashes and killer cheek bones and I feel like an extra in The Lord of The Rings.

So, Aprils Challenge, is limit eyelashes to important social occasions and going out, and NOT to wear them in the office. 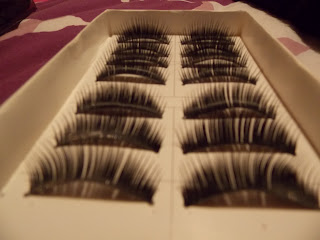 Just taking care of myself one product at time. Serial product hoarder, worked in the beauty industry 10 years so far, immersing myself in all things skincare, hair care, body care and wellness.